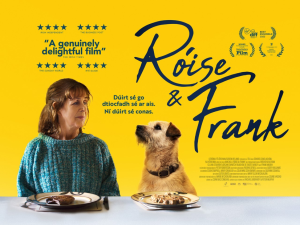 From Ireland: “A heartfelt and charming comedy.” - Film Ireland Magazine

Tickets:
$12.50 General Admission
Tickets available at the door for non-members on a first-come basis.

SYNOPSIS:
It’s been two years since Róise lost the love of her life, her husband Frank. She is now isolated in grief, cut off from family and community. The arrival of a mysterious dog, who seems intent on connecting with Róise, heralds a huge change, but is it for the better? Róise imagines that this dog is her beloved Frank, reincarnated. While her son worries that his mother has lost her mind, the local community seem to embrace the idea of Frank’s return! Róise is happy once more but is there a future for her with a dog-husband? Drama / Comedy 87 min. - from Ireland, with English subtitles. TRAILER

BONUS! A delightful animated short film, “The End,” will precede the feature film!